If you are struggling to get a loan because you have a poor credit record, you are far from alone: millions of people are in the same boat because of financial mistakes made in the past. These people would once have been unable to get any form of loan or, if they were lucky enough to have been offered one, would have faced extortionate interest rates. 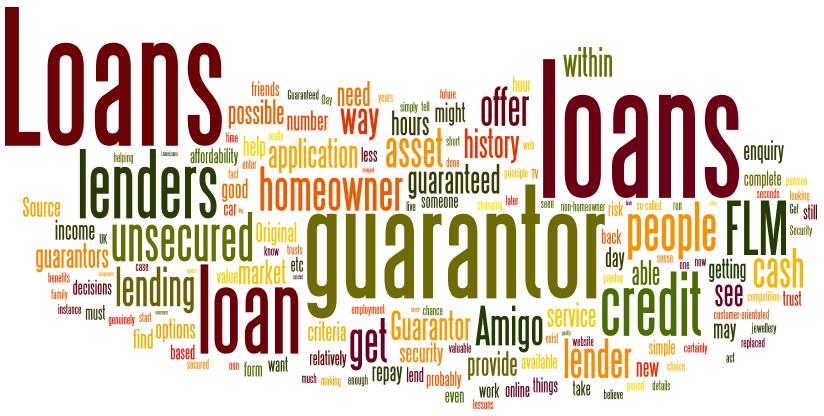 But the growth of guarantor loans is changing that. With this type or loan a third party – perhaps a family member, a close friend or even somebody you know well at work – acts as security by guaranteeing that your repayments will continue to be made. They become a signatory to the loan agreement and will have to continue to make payments in the event that the borrower defaults or gets into arrears. Anybody can be a guarantor so long as they are over 21 years old and have a regular income in a job, as a self-employed worker or receive a regular pension. The guarantor must also have a good credit record.

There has been a good deal of publicity recently about guarantor loans and not all of it has been positive. Many media reports have suggested that because this area is growing so quickly, it is the next payday loans scandal in the making. But it isn’t: the organisations that offer these loans are generally responsible companies who are regulated by the Financial Conduct Authority. They use credit checks and affordability assessments to ensure that the money they are lending will always be appropriate to the borrower’s circumstances and to reduce the risk of delinquency.

Yet myths continue to abound. Here the six main ones:

Because of the security provided by the guarantor who has a good credit record, lenders usually charge much lower interest rates with guarantor loans than many other forms of credit including payday loans, credit cards and unsecured loans. If you are struggling to get approved for other forms of credit because you have an impaired credit record, you may well find that a guarantor loan will provide you with a means to borrow the money you need at an interest rate you can afford.

This is not Payday Loans Part 2. Guarantor loan organisations are governed by rules laid down by the Financial Conduct Authority (FCA) and this means that anybody operating in this area must behave responsibly. On top of this, the companies providing guarantor loans carry out proper due diligence to ensure that a borrower is not getting out of depth including using affordability assessments and credit checks on the guarantors. If you don’t have a regular income, are on benefits or have already got arrears on other lending, then you will face further checks. The lender will want to apply particular conditions to any guarantor loan it offers you including how much you can borrow and how long you will get to repay it.

Myth: I’ll end up losing my home if I’m a guarantor

This is another canard and arises from confusion over the difference between a guarantor loan and a homeowner loan. You don’t even have top be a homeowner to act as a guarantor for somebody else – just have a good credit record and be able to pass the lender’s affordability assessments. While you will be responsible to ensuring the repayments continue to be made in the event that the borrower gets into trouble, you won’t be putting your home on the line by signing a secured loan agreement.

Myth: These types of loans are a flash in the pan

While the name may be relatively new, guarantor loans are actually a form of lending which has been around for hundreds of years. Prior to the rapid growth in consumer credit in the early 1990s, most of the high street banks offered forms of guarantor loans. When younger borrowers or those who had not held bank accounts for very long wanted to borrow money, the manager of their bank branch would often interview them when they wanted to take out a loan. There were few, if any, credit checks and so in some cases the bank manager would rely upon the signature of a guarantor before offering a loan to a new borrower. That guarantor would then, as now, promise to continue to make the repayments should the borrower have difficulty.

Myth: I can only borrow a small amount

Because this area of the credit market is growing so quickly, more and more guarantor loans are being offered. Many of the companies offering guarantor loans are advertising amounts of up to £12,000 and sometimes even more. What matters, are the circumstances of each individual borrower.

Myth: I can only ask a family member to be a guarantor

It won’t matter who you ask to be a guarantor for your borrowing, so long as that person has a good credit record and is able to pass the affordability assessments which each lender applies. So you can choose anybody to ask to be a guarantor so long as you have a trusting relationship with that person. That means he or she could be a parent, one of your closest friends, somebody at work or anybody who knows you well enough and trusts that you will be honest with them financially.

Article provided by Mike James, an independent content writer working together with technology-led finance broker Solution Loans, who were consulted over the information contained in this post.