If you thought it might be bad financial advice to put your money into fine art, you could be wrong. The sale in New York of the last Leonardo Da Vinci painting in private hands reached a historic level, with a mystery investor paying a record $450 million (£342 million) for the newly famous work. 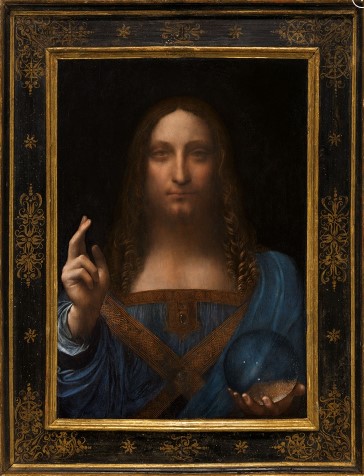 Da Vinci’s Salvator Mundi, which features Christ as the Saviour of the World, was the subject of a fierce battle among bidders in the New York auction room this week, as they took instructions from their clients in various parts of the world. The hammer came down at $400 million, and another $50 million was added in fees.

The 500-year-old painting, which for years had been obscured by layers of paint and took years to establish as an authentic Da Vinci, was previously sold at auction for a paltry £45. Certainly anything by the famous Renaissance artist, whose Mona Lisa — one of the world’s most famous paintings — draws millions of people to the Louvre in Paris each year, will attract top art-investment dollars.

“On a historic night at Christie’s in New York, Salvator Mundi, a depiction of Christ as ‘Saviour of the World’ by one of history’s greatest and most renowned artists, sold for $450,312,500/£342,182,751 (including buyer’s premium), becoming the most expensive painting ever sold at auction,” Christie’s said.

The night’s total haul in its Post-War and Contemporary Art Evening Sale totaled $785,942,250 and included an Andy Warhol take on another Da Vinci classic: his Last Supper. The late Pop Artist’s Sixty Last Suppers, in which a series of Last Supper images of different variations are placed beside each other, went for $60.8 million.

Prior to the Salvator Mundi sale, the record for the biggest price at auction for an Old Master painting was Massacre of the Innocents by Peter Paul Rubens. It sold for $76.7 million (£49.5 million) in 2002 while Da Vinci’s Horse and Rider drawing was auctioned for almost $11.5 million a year earlier. Christie’s had previously achieved a record price for a work of art in 2001, when Picasso’s Les Femmes d’Alger (Version “O”) was sold for $179.364,992 million.

For the ordinary investor, however, these sort of stratospheric prices are way out of range. But that doesn’t mean people are not buying up less expensive pieces and adding them to their investment portfolio. And it’s not all about fine art, which after all includes a host of potentially costly requirements. These can include everything from stringent security measures to fine art shipping and fine art storage.

The causal investor, it turns out, is increasingly giving fine art the brush-off, most likely due to the high prices works can fetch. Instead, photography and rare musical instruments are now favoured by growing number of people, as they seem to make solid returns on their investments. Last year, a photograph sold in London for £600,890, with others going for around $400,000.

That’s according to new research by Coutts, the storied private bank and wealth management firm in London. Traditional Chinese works of art are also currently popular among ordinary investors, it says, partly because the entry level is far lower than the large sums typically required to purchase Old Masters. The upmarket financial firm said that during 2016, fine art investments dropped by 6.2%, as people instead poured their money into other items.

Meanwhile, there’s always the chance of picking up a real bargain at your local antique store or market or auction house. It could even turn out to be a priceless masterpiece.